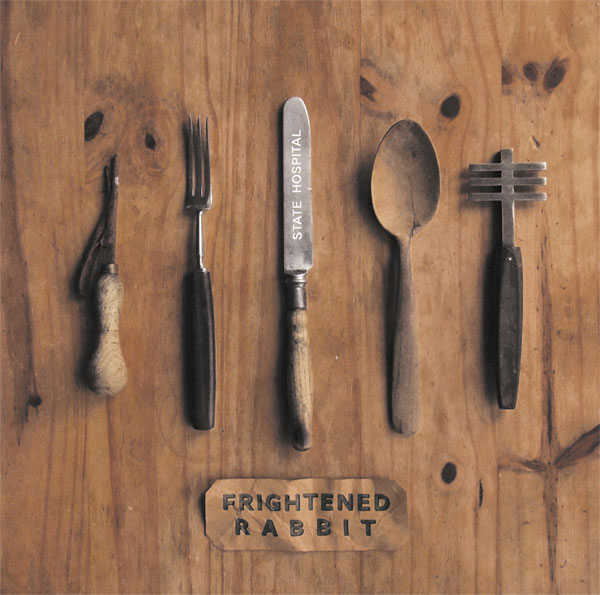 Scott Hutchison bleeds deeper and “thicker than concrete” on Frightened Rabbit‘s State Hospital EP but instead of sparing himself, he remains, at the end of it, barely viable, with significant blood loss, for he has poured out everything, like a sacrifice for honesty, he has told us everything, and he cannot go back. And we are sure that he will continue into the fire all bloodied and splintered and whittled. For it is his way.

As he sings on “Home From War”: I might never be normal again/ but who cares/ I ask who cares/ now I’m standing disheveled at your door/ covered in dust and dirt but full of hope, we realize the result of reckless supplication. It is in Hutchison’s unwillingness to be torn asunder by the reality of the big picture, no matter the bleakness, that his passion pours so thick, so ready, so tangible. Each line sits on Hutchison’s Scottish tongue and dissolves, forcing its way into the soft, cold climate of the music, and its seething soul refuses to retract. Hutchison’s poetry imposes its tenderness, and we nearly forget the dark place stoking the content of these songs–a girl “born into a grave,” a dynamic that “you can scrub, you can soak, but you can’t wash it out,” a universe “that eats itself, and swallows us whole.” There is much to be explored in Hutchison’s visual diction–State Hospital EP proves once again Hutchison as an infuriatingly brilliant lyricist. What is more is his ability to adapt to the dark by cuddling against the musical life-force he creates with a humble, wry humor as he “celebrate[s]” the fight of life: in style/ in boxer shorts and spirits/ floor littered with ghosts of bottles past.

In a surprising twist, Hutchison paints with spoken word on “Wedding Gloves” in a sumptuous groan and then jumps high–laddering falsetto on the vein-stick suppleness of a tracing bassline–and we cannot believe we have been given such a gift. The story has not changed for Frightened Rabbit, for we are ever-reminded that “all is not lost.” It is not some half-conjured consolation. It is not an attempt to push the bad under a rug. It’s an honest and brave exploration of the soul’s depth and its propensity to glean hope, possibly, from a bit of light that actually does exist.

Frightened Rabbit releases this tremendous State Hospital EP as a reminder of their enduring past offerings including 2007′s The Midnight Organ Fight and 2010′s The Winter of Mixed Drinks and refuels the anticipation of the band’s next full length. It’s the band at it’s best–as emotional as ever and gripping, clinging to the sticky fruit of its music as to recover from the bloodletting that is State Hospital EP and representative of Frightened Rabbit’s blood drenched musical backstory.

Videos and Clips taken from frightenedrabbit.com