Rainin’ men outside, so I guess I’m stayin’ in.

September 8, 2014
by Lauren
Comments Off 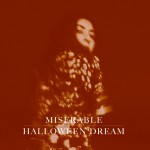 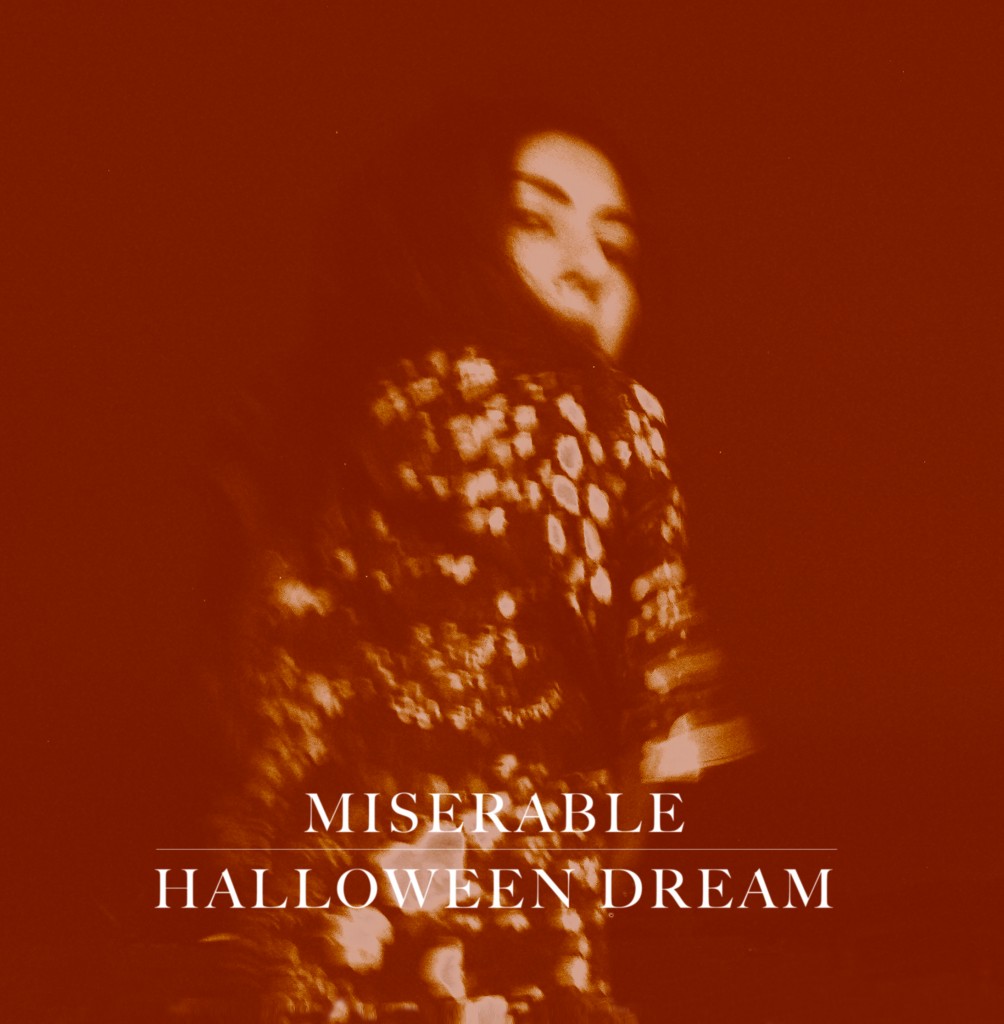 Miserable’s Halloween Dream, the debut EP from San Francisco shoegaze outfit Whirr’s Kristina Esfandiari, delivers a gauzy liquid flowing within a contemplative musical framework. Its succulent griminess keeps our heads soupy, and we spin in the downtempo parade. The title track’s fuzzy-lipped current climbs like smoke on a lit wick under a glass-trapped haze. Punctuated drums usher in the cinema of hand-cracked guitar strings feeling their own distortion beneath Kristina Esfandiari’s imminent clouds, reminiscent of Sunny Day Real Estate’s perfect tension between groaningly dark cascades and rapturous climaxes. With “Bell Jar,” Esfandiari’s cloaked pout emits a powdery weight, the spookiest room in her Victoria-Legrand-esque husk, as drums pile to a steady clip. With a whoosh, the dust in the room shoots up, its bulbous opacity spreading. Amidst distant vocal screams, we stand motionless, daydreaming on the particulate matter and how beautiful it moves. In “Spinning,” we marvel as strummed lightness deposits in a breathtaking slow-motion drop covering all the delicate grains that make up the heaviness of Esfandiari’s air.

Halloween Dream BY Miserable, to be released February 18, 2014 on ultra clear 7″ vinyl with gold haze on The Native Sound

Listen below. Buy it here. 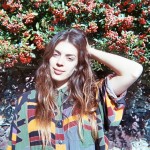 Rooms With Walls And Windows by Julie Byrne

Julie Byrne’s deput LP, Rooms With Walls And Windows, a record delicately hinged almost solely to Byrne’s palpable voice and unfettered plucking, stirs with a sonic lushness that spills casually and unapologetically through her acoustical confines. It’s Byrne’s dynamic and staring solitude on top of her glancing whimsy, that creates a haunting folk all her own; one cannot listen it away.

The album’s opener, “Wisdom Teeth Song” meanders with jet-lag ambivalence through pillowy hums, like paper on plucked drops of water, and tapestried strums distort and reach out and connect to one another, spilling onto pathways of musical narrative. Upon the album’s opening, Byrne’s presence is enchanting, but aloof. Not a moment later, the face-out discourse of “Young Wife,” in which Byrne’s careful friendship with her page-turned guitar strings beckons the listener, asks our hand to dance and leads Byrne’s mystery close. Her fingers cut small, staying sparks off the fire into the air, and our faces glow. The fire just builds from there, swaddling the listener in a neck-breathe blaze. In Byrne’s spare Rooms With Walls And Windows, she seemingly lingers in a vast world. Her ability to emit so much flame, given the simplicity of her songwriting tinder, astounds.

“Attached To Us Like Butcher Paper” clings with a feverish desperation amidst Byrne’s delicately windblown affect. Byrne cries softly, “And we’ll have toast and warm fried egg, and the bad feelings will have all gone away.” And her voice cracks and tests the time. She conducts a moving vocal orchestra, sprawled and elaborately building, with the word, ‘Honeybee.’ Byrne proclaims,“I’ll be all the medicine you need.” And as Rooms proceeds, we are sure of that very thing, for Byrne’s power lies in her unflustered rapport. We are like quick patients slowly falling in love with the balm of our caretaker.

Byrne’s mere Rooms are entrances into an unruled pasture equally equipped for the rest of the weary and the untapped awakenings of the wanderer. While “Piano Music” sends us searching, “Emeralds” leads us home. It’s a complex print that Byrne has put her finger on, a combination between longing and finding, and it is all her own.

We get the sense that Byrne is telling these stories as she goes, which needle-laces Rooms With Walls And Windows with a ripe sincerity. They are songs undone and finished all at once. We are not the only active listener; Byrne is too, even as she sings, she is sensing, understanding, present. And it’s her adherence to the beauty and sadness of such raw intimacy, whether strummed or sung, that keeps us there. “Vertical Ray” echoes with weary-hearted grandeur. Byrne’s timbre spreads into an expansive lull, like a forest of trees falling one at a time. With “Keep On Raging,” Byrne steps knowingly, deliberating the stranded sound of a desolate ocean being reminded of its strength, a sort of primal lullaby for the battled.

In the warm, loping glow of “Prism Song,” Byrne sings, “If you were the shades of colors my eyes could not see…I never would have known what you could have meant to me.” With Rooms With Walls And Windows, we find ourselves gasping through our ears to hear its simple, extraordinary colors, and with the strange feeling that we might have just chanced upon it.

Written on an “obligatory backpacking trip across Europe,” “Traveller’s Shoes” turtles through country’s standard crop circles of dark humor and self-pity, but Bellows takes “the next step after crossing the line,” and his soapy disposition keeps us warm and washing in an impassioned wallow. Bellows shines like the plum cheeks of an old-country cowboy—good and sun-parched with the ruddy belly-aching of helplessly observing life slowly and forever lose its luster, like a great hourglass, the sand seeping through a tiny hole. Bellows rejoices in a cracked-back drawl, braced with the promise of remaining in a sad state. His ability to project dismay on the listener tenderizes one into a sadly dancing putty. Bellows works the old country miracle–the bar-saddled sad becomes good fun. “Traveller’s Shoes” withers on: “And your stories will keep on shining, but then the sun starts to set. You are a man that is easy to forget.” A cutting harmonica damns the slow scrape of wind-bagged drums as the transient’s dilemma blinks with endless recognition, and a slovenly smile creeps onto our faces.

In “Second Nature,” Bellows and Rind’s Lee Relvas broil together in thick drama in a punctuated duet with a dusty ruckus charm. Their deliberations must over kettle-ready steel and Relvas’ boozy songbird bacon-wraps the gristle of Bellows’ plain farm-boy folk. We chew and spit and get caught up in the carry-on.

Below, check out another gem from John Bellows. John Bellows performs “Bare To The Bone” live at LaLaLand.

It hurts to see you go.

Read Chunklet from here to here. It’s almost too hard to swallow. How do we protect artists who have made themselves vulnerable to the harsh elements of the world? Artists that break our hearts with their stories and honesty. The most resounding and most painful words I have read about Molina in the midst of this are these(chunklet.com): “Jason leaves behind him an enviable body of work that will be continually rediscovered because what Jason wrote wasn’t fashion. It was his heart. It was his love. It was his demons. And ultimately, it brought his life to an end.” Molina writes in the first song on his last release “Heart My Heart:”

The world still finds it. And I still fall apart.

We mourn in the passing of a beautiful person and prolific heart. Jason Molina.