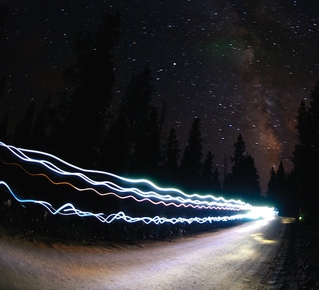 S. Carey drenches his latest four-song EP with intoxicating atmospheric buildups and sweetly patient hesitation. Hoyas pours sparsely plucked guitar sequences over a glittering, echoing sonic desert to create a loose complexity fortified by the biding of time. With Hoyas, the Bon Iver drummer and accompanying vocalist, pinnacles on the sonorous by route of the avant-garde.

Hoyas is intonated specs of sand voyaging to a desert; the listener realizes something is happening when the EP reaches its culmination, but it’s almost indecipherable how the music made it to such an emotional peak. Carey employs some of the more extroverted instruments at his climaxes-horns, keys, drums-but it’s not an overt demand on the listener to feel excited. And this may be the wonder of S. Carey’s tinkering. He formulates emotion through a steady build of many parts. This holistic approach to the song-form asserts a refreshed appreciation for the little nuances—they are clearly calculated by a deliberate, impassioned vision. There is a clarity behind the dissonance—Carey layers sheets of discord in such a way they match up perfectly, creating a righteous harmony unmatched by even the polished perfection of cinematic scores. It is infinitely better though, because we aren’t told to feel a certain way before we have felt it for ourselves.

With “Two Angles” Carey utilizes porous beats and mowing electronics to culture the stage for his softly embedded vocals. As the beats drop faster—from a slow rain to a steady downpour—Carey’s vocals proceed in whisps and shaves cutting across each other. Electric guitar shudders in starts and stops, growing more confident with each measured outcry. Just in time, the horns belly up with pestering might and suddenly, with a speech in which they are convincing everyone of their cause—even themselves—delineate the ‘then’ from the ‘now.’ The music has gone through a major character development at its most fundamental part. There are not many people who make music like this—preserving the validity of a song through its ability to create even at is it is being created. In essence, S. Carey has created something that continues to create.

“Avalanche” shackles from the start. A drum whisks and a slight auto-tune filter whittles Carey’s basking cadence. A piano redirects. Vocals rest and wake up on one another. “Inspir” hypnotizes in a repetitive chant. Deeply resounding and articulate voice-in-the-sky prophecies truncate fanned moans, electronic blips, organ, and atmospheric wind tunnels. It’s one of those pay attention songs. Too concise to question, too captivating to walk away from unshaken. If there is any song that will make you a believer, it is this one. “Marfa” is a pretty, reflective closer, as expansive and eerily intoxicating as the namesake’s barren land and star-filled skies.

With Hoyas, S. Carey enters a new electronic territory, more sonically open to possibility and more certain on how to go about it. It’s a slow-burn listen that keeps on blooming, proving that limitations exist only in the mind of the beholder. Tear the plastic off this thing, because it’s breaking rules even as it sits sealed neatly in the socially edible contours of song structure.

S. Carey “In The Dirt” video from his debut album All We Grow: